We hope to get the attention of Cardinal Robert Sarah so he will intervene to defend decent Catholic spouses from no-fault divorce.  This may be difficult because, according to EWTN’s Rome correspondent, Edward Pentin, an orthodox Cardinal in charge of a dicastery might be forced to have personnel working under him who are reformists who do not know canon law or ecclesiology. Cardinal Sarah might be pleased to help us, but he may never know we are asking for help if personnel in his dicastery block us.

In his position as Prefect of the Congregation of Divine Worship and Discipline of the Sacraments, Cardinal Sarah is responsible for resolving certain kinds of controversies brought to him.  Recently, a different Congregation (CDF) issued a response resolving questions about the problem of using the wrong formula in baptisms. We’re asking the Congregation of the Discipline of the Sacraments to resolve questions about the problem of relegating to no-fault divorce courts all cases of separation of spouses.  Whenever Catholics divorce, they are approaching the civil forum in a case of separation of spouses.

For years, I’ve been showing abandoned spouses how to invoke canon law to ask the Church for help during a marriage break-up. However, in the United States, Catholic chancery personnel seem to think that the civil courts are the authority with rightful power to decide cases of separation and divorce. My research findings show the opposite.

One abandoned wife who submitted a canon law petition was just featured in Leila Miller’s blog yesterday, “When even the Church abandons the abandoned spouse.” 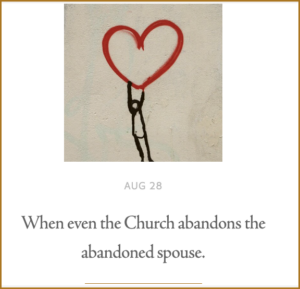 Miller is the author of books: “Impossible” Marriages Redeemed: They Didn’t End the Story in the Middle endorsed by Bishop Athanasius Schneider; and Primal Loss: The Now-Adult Children of Divorce Speak, endorsed by Cardinal Sarah. About divorce, she says in her blog yesterday, “nothing in that carnage grieves me as deeply as when the agents of the Catholic Church are complicit in the dismantling of Catholic families.” Miller published a diocese’ response that one abandoned wife received with identifying information removed. “What she received in return” says Miller, “was, in my opinion, scandalous: cruel, condescending, and in opposition to Church teaching and the moral law.”

Some time ago, the woman in Miller’s blog did appeal to Cardinal Sarah’s Congregation of Divine Worship and Discipline of the Sacraments, but they never conducted a proceeding deciding the controversy she raised. Today, I’m sending a cover letter to Cardinal Sarah for a number of aggrieved appellants, in addition to the woman in Miller’s blog. All never had their recourse decided by his Congregation.  See my cover letter HERE that says the following:

Attached is a copy of the recourse that was previously submitted to the Congregation of Divine Worship and Discipline of the Sacraments. The appellant asked me to submit to you a cover letter supporting the appellant’s position. We ask you to please intercede and protect Catholic spouses from civil no-fault divorce by ensuring that bishops decide cases of separation of spouses when petitioned.

The diocesan leadership in the United States errs when they relegate their exclusive authority in cases of separation of spouses to the civil forum. This error is exacerbated because the civil forum uses no-fault divorce. Therein, the state purports to have competence to relieve every abandoning spouse of his or her obligation to both maintain the common conjugal life and contribute one’s share of the secondary end of marriage: mutual help. Additionally, divorce defendants, who have committed no offense justifying separation, routinely lose everyday access to their children which causes immense pain and gives scandal.

Your Congregation conducted no proceeding addressing the attached recourse.

Christ, through his Church, has much more to offer married couples in crises than we are seeing right now in the United States. We must correct the harmful policy of having government divorce courts decide cases prior to any Catholic canon law investigation. 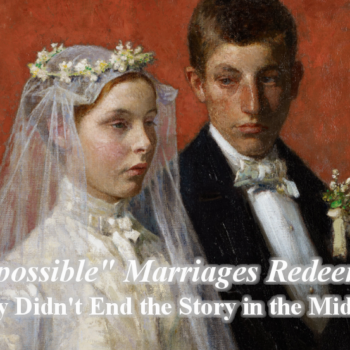 Lifelong Marriage Not only an "ideal" Goal 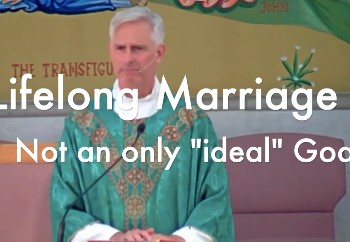