Have you thought about signing your wedding promises as a keepsake?

With fade resistant ink to last a lifetime, this 11″x14″ artistic creation, on handmade paper, shows the traditional  marriage promises as under the authority of God’s Word the Bible, or the authority of the Holy Roman Catholic Church (contact us about showing different vows). Each custom-made proclamation (title, Solemn Marriage Covenant) includes the date and location of the wedding, and the names of the husband, wife, maid of honor, best man, and the presiding minister, with corresponding signature lines. If you are renewing your consent, less names are shown. 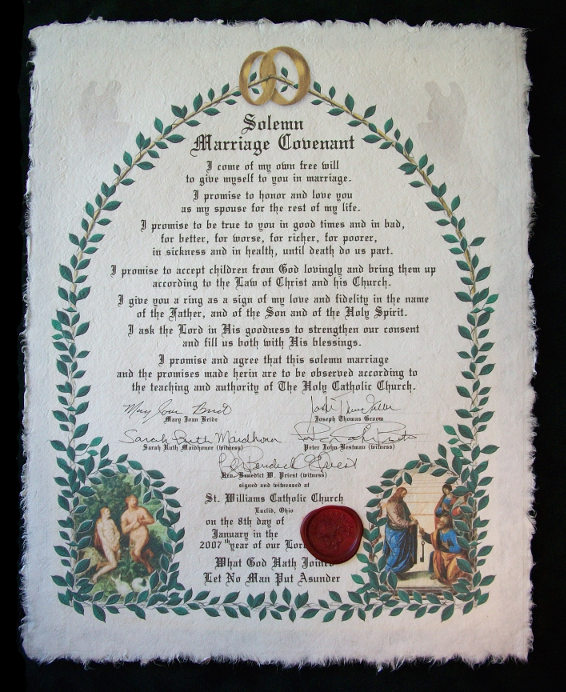 State law requires every bride and groom to get a state marriage license when they contract marriage, but the state does not require parties to put in writing the terms of their marriage agreement.  The language in this document includes sections on Covenant of Marriage, Arbitration Agreement Between Husband and Wife, Property, Debt, Support and Household Expenses, Household Tasks, Will, Life Insurance, Having and Raising Children, Adoption, Upbringing of Children, Governing Law, Promises regarding disputes, and Designated Rules applicable to one’s marriage (i.e. Catholic Code Canon Law, or Rules of Procedure for Christian Conciliation of the Institute for Christian Conciliation). 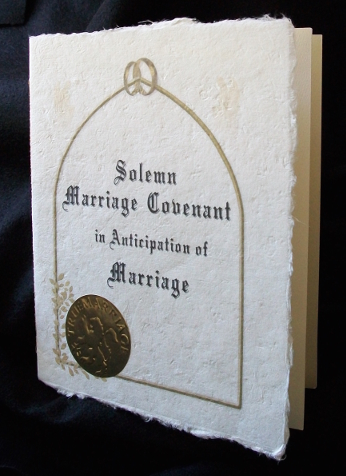 Why would anyone sign a True Marriage Proclamation Set?

With simple civil marriage, there is no expectation for parties to uphold marriage promises and all that those promises entail. Those who want simple civil marraige expect husband and wife to be married until one wants out for any reason whatsoever; thereafter, property should be split 50/50, and a civil judge should decide who pays support.

A bride and groom who intend to promise more than simple civil marriage, would want a True Marriage Proclamation Set.

The Proclamation Set is for those who never intend to have unilateral no-fault divorce in their future. The set is for those expecting marital situations to be managed by arbitrators who respect the promises parties made.

Hear about Catholic teaching on marriage and grounds for separation with Dr. Bacon’s interview of Bai Macfarlane on December 7  for WKQA radio in eastern Virginia.

Civil courts have a divorcist mentality. In all cases, the property and children are split. In some civil courts, the default is to split everything 50/50. In other courts, the default is for the non-residential parent to have overnights with children about 1/5 of the time and pay child support.  In both scenarios, there is no consideration given to children and the other spouse who wanted to keep the family together and were critically counting on the marriage promises being upheld.  In cases where a marriage is truly invalid, the no-fault divorce courts don’t care if one party had committed fraud on the wedding day, or was psychologically incapable of marrying.

Can I see free Do It Yourself set (DIY), and how much does luxurious set cost?

The luxurious version of the True Marriage Proclamation Set shown above costs fifty dollars ($50) plus $8.00 shipping in the Unites States. Order HERE.

If you are not interested in the luxurious version, a do-it-yourself option is available for FREE to print it on your own paper.

Can we get a Proclamation Set if we are already married?

Will these hold up in court?

The Accompanying Document Booklet is like other pre-written documents distributed as office supply legal forms, or do-it-yourself legal forms.  Different state and county courts may enforce the terms of the agreement differently. Some states have implemented a form of the UPPA Uniform Premarital Agreement Act as described on the website of the Uniform Law Commission.  Harvard Journal of Law & Public Policy published article by Jamie A. Aycock, “Contracting Out of the Culture Wars: How the Law Should Enforce and Communities of Faith Should Encourage More Enduring Marital Commitments.” Aycock explains the benefit of parties having their own marriage contract:

“[A]dvancing contract in marriage reduces the role of the state to only (1) setting the minimum requirements for entering marriage, (2) setting the minimum responsibilities spouses must assume toward one another, and (3) enforcing any additional terms agreed to by couples. This is significant because covenant marriage has drawn criticism from those who argue that it advances a particular normative vision of the family by adopting a form of fault‐based divorce. Advancing contract is not likely to draw the same political fire because it avoids enlisting state support for a particular normative vision. Instead, advancing contract principles amounts only to legal enforcement of the terms to which a couple agrees apart from any state influence or endorsement” (page 247).

Why didn't my priest recommend this?

If a priest, who was not a civil lawyer, explained the language in the Accompanying Document Booklet, and recommended that a couple sign the agreement, someone could complain that the priest should be charged with engaging in the unauthorized practice of law.  However, signing the Proclamation of Consent would not involve the question of unauthorized practice of law,  because it only restates the language in the Catholic Order of Celebrating Matrimony.

The Accompanying Document Booklet has a disclaimer explaining that it should not be deemed legal advice of any type. Those receiving it should consult with an attorney for determining the local laws and rules affecting these agreements, or consult a lawyer familiar with the law in the state in which parties are married.

A diocese could decide to have a lawyer available to give instructions about this.

What does Religious Liberties Lawyer and Law Professor say?

If I work with couples, is there any literature for them?

A sample of the luxurious “Solemn Marriage Covenant” can be provided to those who will repeatedly  show it to couples.  Mary’s Advocates can provide 4″x 5″ cards for distribution to couples, shown as pdf HERE.