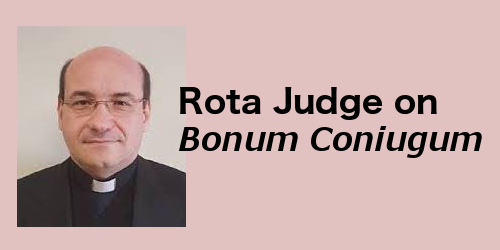 by Bai Macfarlane
Roman Rota Judge, Msgr. Davide Salvatori gave a presentation at the canon law conference on August 7 at the Shrine of Our Lady of Guadelupe. His topic was  “The Bonum Coniugum in the Light of Rotal Jurisprudence, the Mind of the Commission for the Revision of the Code of Canon Law, and of Papal Magisterium: Systematic Synthesis and Applications in the Instruction of a Case.”

Bonum Coniugum literally translates to the good of the spouses, and some have believed that if one’s good is not being fueled by the other spouse to one’s satisfaction, then that is grounds for invalidity of one’s marriage. Msgr. Salvatori provided a definition of bonum coniugum. “The phrase bonum coniugum (cf. can. 1055 §1 CIC 1983) was chosen to describe the secondary end.” […] “In summary, the bonum coniugum for the Code Commission is the secondary end of marriage,” [mutual assistance and remedy of concupiscence]. Furthermore, “the 1977 Code Commission inserted the phrase bonum coniugum into the Code.”

In the Code from 1917, canon 1013 §1 states the ends of marriage, “The primary end of marriage is the procreation and education of offspring; the secondary end is mutual assistance and remedy of concupiscence.”

The 1983 Code shows the phrase bonum coniugum in canon 1055 §1 “The matrimonial covenant, by which a man and a woman establish between themselves a partnership of the whole of life and which is ordered by its nature to the good of the spouses and the procreation and education of offspring, has been raised by Christ the Lord to the dignity of a sacrament between the baptized.”

The 1983 Code was compiled by consulters and notes from their discussions are published by the Pontifical Council for the Interpretation of Legislative Texts.  A Latin expert would be needed to find the discussions from 1977, wherein the consulters said that bonum coniugum means the secondary ends of marriage (contact ma.defending@marysadvocates.org to find consulters notes).

Msgr. Savatori made it very clear that the hierarchy of ends is still in force.  The primary end of marriage is still “the procreation and education of offspring.”  He referred to Pope Pius XI 1930 Encyclical Casti Connubii, and Pope Pius XII 1941 Address to the Roman Rota (Italian).

In the observations about the 1980 draft of the new Code collected from the Consulters, there is discussion about how it is absurd for something to have more than one fundamental end. “b) Est philosophice absurdum ad aliquod ens assignare plus quam unum finem essentialem et principalem. « Finis est unus tantum in uno ordine » (S. Th., De ventate, q. 22, a. 13, ad 9. Cfr. etiam 1-11, q. 1, a. 3, ad 3; a. 5)” Machine translate shows, “Is philosophice absurd to some being assigned more than one end of the essential and fundamental. ‘The goal is one only one order’.” (Relatio, Animadverionum Schema. 16 iulii 1981. page 243 on canon 1008 of the 1980 Schema).

However, the accidens of something can be many. “c) Fines accessorii et «operantis» possunt esse plures. «Causa finalis matrimonii potest accipi dupliciter, scil. per se et per accidens” (ibid).  So, being ordered toward mutual assistance and remedy of concupiscence is an accidens of marriage.

When  considering canon 1101 (simulation by a positive act of the will) if one excludes bonum coniugum (i.e. mutual assistance and remedy of concupiscence), then a marriage is invalid. This ground first appeared in Rotal Jurisprudence in 1999.  Msgr. Salvatori explained that one who adds to marriage their own end that is contrary to marriage is really simulating marriage itself (c. 1101 §2).

[H]ow it is possible to exclude an (essential) end?

If the good of the spouses is only a secondary end, in this case it is not possible to declare the marriage as being invalid due to its exclusion: can. 1101 §2 speaks in fact of exclusion of an essential element or an essential property.

This logical difficulty is overcome jurisprudence which distinguishes between the finis operis  (= the end of the marriage itself) and the finis operantis (the end that someone has as one’s own goal when getting married; it is an end added by the simulator to the essence of one’s own marriage).

According to this framework, the exclusion of the bonum coniugum  coincides with total simulation. In fact, if one excludes the essential end for which marriage is constituted, he implicitly excludes the marraige itself.

Prior to 1999, Rota sentences were issued on the incapacity to assume the essential obligations of marriage per canon 1095 §3, and the example provided by Msgr. Salvatori was that the incapacity to be ordered toward bonum coniugum is ground for invalidity based on psychic reasons “in the case of a person with a severe narcissistic personality disorder” […] “because a party was unable to identify himself as a husband, recognizing the other party as wife, to wit a subject distinct from oneself, with one’s own individuality and rights”

There is a difference, however between someone who becomes terribly selfish years into marriage, and someone who suffers from a severe narcissistic personality disorder at the time of marraige.  Msg. Salvatori answered a question from an attendee about this distinction and he emphasized that the judge must collect juridic facts about the behavior of the party prior to marriage and during marriage.

In addition to teaching about bonum coniugum, Msgr. Salvatori said that Rota judges know that some U.S. tribunals collect proofs from parties and witnesses that are problematic. Voluminous acts answering many questions contain useless opinions and irrelevant facts.  The Rota judges refer to these problematic processes as modo americano.  He said the judge is supposed to look for “juridic facts” that carry in themselves probative value (evidence which is sufficiently useful to prove something important in a trial dictionary.law).

For those who believe their marriage is valid, who find no help locally, Mary’s Advocates shows defendant/respondents canon law they can use to uphold their right of defense.