Court Positioned to Take Children and Property from Husband who is a Fit Parent.

On February 27, a Pennsylvania husband and father of two is schedule to appear in front of divorce court employee, “Judicial Officer” Michele Varricchio, in Allentown to discuss his challenge to the constitutionality of unilateral no-fault divorce.  Ryan Pankoe and his wife were married in 2009 and have two sons. In Lehigh County Court, in Allentown PA, his wife filed no-fault divorce asking the Judge to “equitably divide all marital property” and give her “sole legal custody and primary physical custody of their two sons.”

On January 18, Ryan filed his Motion for Summary Judgement wherein he argues that it is unconstitutional for his state’s legislators to enacted statutes that give all plaintiffs automatic victory in every divorce case.

His motion says Pennsylvania case law shows that whenever plaintiffs’ “testimony unequivocally indicates that [they] no longer desire to be married,” the court favors every plaintiff and there is no defense against a divorce complaint. Another case quoted shows that if a plaintiff has an “attitude that reconciliation is not possible,” the plaintiff wins every time.

For example, due process rights require that no Defendant is allowed to be summoned to court unless the Defendant is accused of injuring the Plaintiff by failing to uphold some law-based obligation based in behavior (not subjective emotions). However, there is no such thing as an obligation to make one’s spouse feel like the marriage is reconcilable (whatever that means).  Ryan is a Bible-believing Christian and he told Mary’s Advocates,  his marriage is reconcilable, of course. He says his wife is choosing to abandon the marriage, which gravely harms their children, and he finds it unjust that the Judge, through unilateral no-fault divorce legislation, is rewarding his wife for breaking up their family.

Furthermore, the Pennsylvania Constitution forbids private/special laws in which the legislators set the court to rule on an individual’s private opinion or desire.  In unilateral no-fault divorce, Ryan shows that the court always decides cases based on the private opinion of the Plaintiff. No-fault divorce actions don’t meet the requirement for plaintiffs to bring facts proving anything injurious about the behavior of defendants in the preliminary complaint for divorce.

On Ryan’s wife’s claim for custody of their children, she signed a statement under penalty of misdemeanor if false: “Mr. Pankoe currently lives in an RV camper that is not hooked up to running water. The children must go outside to get to the bathroom, even in snow/rain/cold.” Mary’s Advocates was told by Ryan, “Those are lies.  It was never true.  Over the summer, we were at a campground and I taught them to swim, etc. at the pool.  We were in a very large 36’, basically mobile home with full-size household appliances/shower, etc.  We were never in there after it got cooler and have always had bathrooms/plumbing.  When we went from the campground, then we moved into a relative’s 2600 square foot 4-bedroom house, which we almost always have to ourselves.”

Ryan’s wife accused him of not caring about their children in her signed statement to the court, by saying, “I feel his decisions are based on his own wants/needs, not the best interest of the children.”  Ryan says, however, his decisions are based on his desire for his children to be protected from all the difficulties of a broken home. He believes having Mom and Dad together is better for his children than divorce and he has no intention of voluntarily forfeiting to the divorce court his right to exercise his parental rights.

Divorce defendants are often coerced into believing that the civil courts have automatic power over all parenting decisions and over all the property when one spouse files for divorce.

On Tuesday, February 11, Ryan attended a court-ordered office conference in which the conference officer is basically trying to get Mom and Dad to agree to split their children between two homes. Ryan told Mary’s Advocates, “I actually got a dissertation from the conference officer about how terrible it would be if people couldn’t divorce at-will and how nobody should be trapped in a marriage.”

Ryan also presented on February 11 a walk-in-motion for the delay of any custody determinations until after his constitutional challenge is addressed.  The request for delay was denied by Judge Varricchio and Ryan says the judge told him, “she’s there to just move cases through and it does families no good to have cases bouncing around in the court and that it’s better to put an end to things quickly” and “You’re just one more family and one more custody case.”

There is a GoFundMe campaign to assist with the huge legal fees associated with challenging the unconstitutional no-fault divorce statutes. 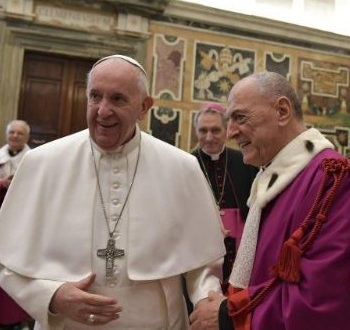 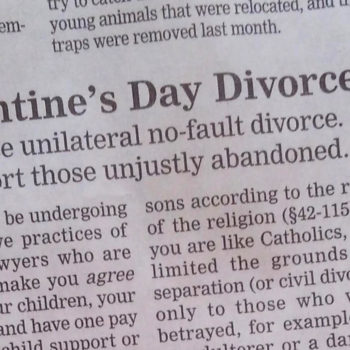