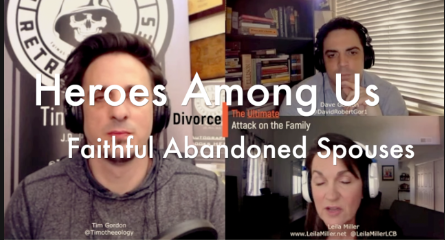 Those who stand for their marriage vow, even when they’ve been abandoned are heroes in our midst. Leila points out that “it makes us very uncomfortable that someone could not be romantic again.” Leila Miller spoke with Timothy and David Gordon on their show “Rules for Retrogrades” on Feb. 26, 2020.

Jesus was abandoned by his spouse. He was the ultimate abandoned spouse. When an abandoned spouse shows a Christ-like commitment till death, the children are more likely to keep the faith.  Leila says, “Divorce is like the parents taking the cross off their shoulders, and putting it on the backs of their children.”

David Gordon reminds listeners, “Without the crucifixion, there is no resurrection. Christ tells us, you have to embrace your cross.”  Excitedly, Gordon says, that being a faithful, chaste, abandoned spouse is a living martyrdom.  If the abandoned spouse “moves on” and marries someone else (quote “remarries”), the abandoner is off the hook.

Being committed to one’s vows after being abandoned by the other is being “a living mark of shame for the wandering spouse. You are calling them constantly to repent of the evil they have done to you” says David Gordon.

Leila Miller begs the Church to support the faithful, chaste, abandoned spouses, rather than support the “move along” mentality. She knows that the abandoning spouse wants the psychological comfort of being able to believe that the other spouse is fine.

The Church has to get back on track and make it known that marriage is a permanent state. Otherwise, there is no witness for marriage; no love of Christ.

Mary’s Advocates provides a support network for separated, faithful, abandoned spouses, and shows them how to ask the Church to implement canon law and chastise abandonment and uphold validity.

Sacred Congregation of the Council - desertion. 1869 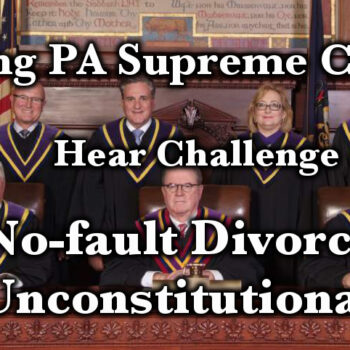