September 20, Bai Macfarlane, Director of Mary’s Advocates was interview live by Father Robert McTeigue, S.J., Ph. D. for his radio program, “The Catholic Current  – a place where people can know the truth, love the truth, tell the truth and do the truth.”

His topic was “Have Annulments Become “Catholic Divorce”?

Father Robert McTeigue, S.J., is a professor at Canisius College in Buffalo NY. As a professor of philosophy and theology, he has taught and lectured in North and Central America, Europe and Asia and is known for his classes in both rhetoric and medical ethics.  He is a member of the National Ethics Committee for the Catholic Medical Association and now works in seminary education.

Of significance is someone of Fr. McTeigue’s caliber giving a pedestal to the voice of separated faithful who challenge the annulment abuses and the injustice of no-fault divorce. Broadcast live on seven stations, weekdays Monday through Friday, Fr. McTeigue’s show reaches from Southern Maine to Southern New Hampshire to Northern Rhode Island to Eastern Massachusetts; from Central and Western New York to Toronto; and Eastern Ohio.

Key points in each segment:

Bai explains how annulment abuses are interconnected with the injustice inflicted on reliable spouses and children in government no-fault divorce.

Fr. McTeigue tells of his friend, Pete, who was encouraged by his pastor immediately after Pete signed divorce agreement, to apply for an annulment.

According to Bai’s research findings, the Church never relegated to the government competence to judge the obligation of husband and wife toward each other.  Unfortunately, Bai says, there are priests who have been taught that the Church’s pastoral care for those in marriage crisis is annulment.

Fr. McTeigue and Bai propose that outsiders pressure abandoned spouses to “move on” and find a new partner because outsiders don’t trust God, are uncomfortable with their friend experiencing pain, want the pain to stop.

Mary’s Advocate’s offers resources to make marriage a more enforceable contract in contrast to no-fault divorce. The essential elements that one must understand, and accept, to validly marry are quite simple: permanence, openness to children, sexual fidelity, and orientation toward contributing to upkeep of the marital household (simplified paraphrase).  Fr. McTeigue described grounds for annulment that should be rare and Bai Macfarlane describe the psychological ground that is abused.

The part of annulment that is misunderstood, Bai says, is that people think there are two marriages: the civil marriage and the Church marriage. People think the Church has no interest in what happens in divorce court, but is only interested in whether someone enters another marriage without an annulment first.  However, Bai’s research findings show that the ecclesiastic authorities (not the government) are supposed to decide the parties’ obligations toward each other. Mary’s Advocates is interested in ensuring that marriage crisis are managed in accordance with the principles to which the parties agreed to adhere when they participated in marriage ceremony.

Fr. McTeigue says a problem is that people want an easy way out, and Bai says the culture is set up to aid and abet the abandoner, even though divorce is like committing suicide.

To a listener’s comment, Bai reacts to the idea that an annulment is to help people “better get on with life.“  Getting on with life, however, Bai says, does not include denying truth. A spouse who abandons marriage or forces no-fault divorce on the other might be like someone in a spiritual coma. Fr. McTeigue explains we never are relieved of our obligation to love those who are entrusted to our care.

Bai describes the legitimate grounds for separation of spouse and that most grounds should lead to temporary separation. A spouse is obligated to do everything in his or her power to cooperate with getting help for the others spouse accused of behaving grievously. Both are obligated to work towards solving problem.

Fr. McTeigue asked Bai to elaborate on her survey findings about abuses by tribunals of the annulment processes designed to protect the defendants’ rights. He says that in days gone by, there was a bias toward the marriage bond being valid and that seems to have reversed now.  Bai believes that if bishops and tribunals had the courage to make judgments about the obligations of the party causing the break-up to repair damage, there would be less marriage break-ups and stronger marriages.

Father McTeigue’s friend Pete, wrote in to Father during the program. Father read Pete’s text, wherein Pete said his wife abandoned him and Pete is remaining faithful and prays for his wife’s conversion.  Before closing, Father endorsed Mary’s Advocates’ book “The Gift of Self, a Spiritual Companion for Separated and Divorced Faithful to the Sacrament of Marriage.”   Monthly, Bai says, separated faithful meet in a telephone conference call using “The Gift of Self” book to support each other.

On the website of “The Station of the Cross Radio Network,” Father McTeigue shows links to podcast and recommend reading materials from discussion with Bai on his program The Catholic Current: “Have annulments become Catholic divorce?” 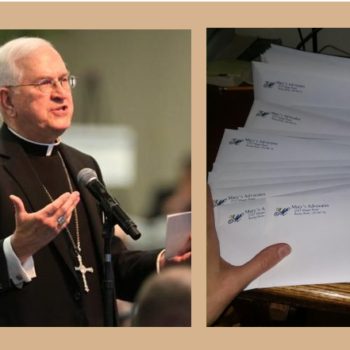