Do the faithful know that two opposing teachings are coming out of our chanceries? Case on Appeal to the Signatura.

By Bai Macfarlane: A Catholic wife and mother of five, who we’ll call Jennifer, used the Catholic Code of Canon law to ask the Church to intervene to try to stop her marriage breakup. Rather than the diocesan personnel helping strengthen her marriage, they made it worse by tacitly condoning her husband’s marital abandonment.

This week, I helped Jennifer compile the correspondence of her case for appealing to the Supreme Tribunal of the Signatura, that is responsible “to exercise vigilance over the correct administration of justice” amongst the world’s Catholics.

Do the faithful know that two opposing teachings are coming out of our chanceries?

When a couple prepares for marriage, they review how marriage is for life, and they must agree to stick together through good times and bad. In some pre-cana programs, guest speakers that have been through an adulterous affair, or near-divorce crisis talk to the engaged couples about the common pitfalls and solutions in marriage.

However, at least in Jennifer’s diocese, when someone is unhappy in their marriage for any reason whatsoever, the diocesan canon lawyer, or Judicial Vicar, will chastise the innocent party that wants to keep the family together. After Jennifer’s husband filed for divorce, she wrote the diocese, asking them to implement the canon law for separation of spouses. She received a letter from the Judicial Vicar saying the following:

He [your husband] has ended the marriage. He has served you with divorce papers. He said he was continuing counseling to help you to deal with the divorce.

… God judges us on how we deal with the reality in which we find ourselves. …  When something or someone dear to us dies, after some anger at the loss, we mourn its end and we thank God for all the goodness we enjoyed because of the person or thing.  Mourn the death of your marriage after appropriate anger.

Imagine how incensed you would be if you received a similar answer from a judge about a violation of another kind of agreement – like a car purchase. After signing a contract with the dealer to buy the car, and after making the last payment on your four-year loan, you would expect to be keeping the car. If the dealer arranged to have his repossession crew take the car away, and you complained to a judge, the judge would not tell you to get over it.

“Oh, your car dealer has decided that he is not obligated to do that which he promised. The dealer is arranging to take the car away and you should go to counseling to help you deal with the fact that you are not going to keep the car you bought and fully paid for. You should mourn the loss of your car and we are NOT going to tell the car dealer that he’s obligated to let you keep the car you bought.”

No one can force another person to do the right thing, but Jennifer was asking the Church to teach the faithful (especially her husband) the difference between right and wrong. Every time some Catholic files for no-fault divorce, observers think there is nothing wrong with divorce, UNLESS the Church intervenes and defines the status of separated spouses. Canon law says this should occur upon request, and one benefit is the prevention of scandal.

Jennifer was shocked that a Judicial Vicar would say her husband can “end” his marriage. Catholic teaching says that a marriage only ends when one party dies. Furthermore, those who enter Catholic marriages are only supposed to separate when the other party has done something grave enough to justify separation, like being gravely dangerous or committing adultery.  Jennifer has done neither.

After writing to her bishop about the disappointing response from the Judicial Vicar, bishop’s reaction was no better:

Efforts were made pastorally to seek reconciliation between Mr. and Mrs. “JONES.” The efforts were not successful. Mr. “JONES” had already begun divorce procedures. His resolve was to see the divorce filing to its conclusion.

Canon law allows someone, like Jennifer, to appeal to the Cardinal Sarah’s office of the Congregation of Divine Worship and the Discipline of the Sacraments.  The reply Jennifer got from them was even more shocking. The person who signed Cardinal Sarah’s name to a rejection letter must not have known about canonical recourse to Congregations of the Roman Curia in administrative controversies.

“since we are not ‘the hierarchical superior of the one who issued the decree,’ we are not competent to intervene in the matter

When I first learned of this letter from Cardinal Sarah’s Congregation, I asked two advisors of mine about it: a theology professor at a trusted Catholic University, and a world renowned Catholic news reporter. Both told me they think that Carinal Sarah never saw the woman’s appeal and he never wrote the letter to which his name was signed. The next recourse for Jennifer is the Signatura. 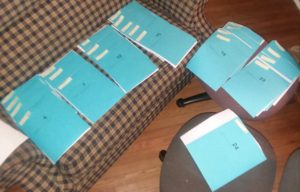 Exhibits stacked all over Bai’s furniture

Each of the 24 blue numbers sheets in the papers all over our furniture is a cover sheet to an exhibit tracing all the back-and-forth correspondence between Jennifer and Church officials in her case. The last exhibit is 108 pages of canonical resources that show that a Catholic is not supposed to petition for divorce without the bishop’s permission first.

Just because her husband violated canon law, natural law, and divine law, does not mean that Jennifer’s right to an ecclesiastical judgment is forfeited.  See excerpts from Jennifer’s appeal to the Signatura here

With the non-profit organization, Mary’s Advocates, I work to reduce unilateral no-fault divorce and support those who are unjustly abandoned. A free template petition is available  HERE for anyone who wants the Church to intervene in a marriage crisis in which a professed Catholic is abandoning his or her marriage. 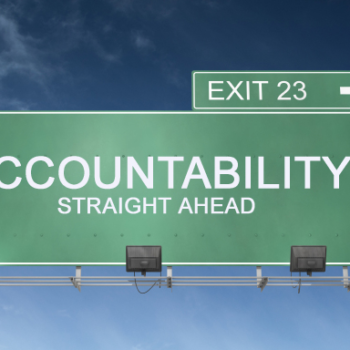 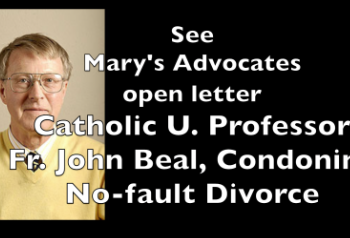