In 1971, the tribunals of Holland had been issuing annulments based on their finding that the marriage had not turned out “a veritable community of love.” The Prefect of the Signatura, Cardinal Staffa corrected them.  His letter was translated into English and published in the Canon Law Digest, and the Jurist. Excerpts from Canon Law Digest:

(p. 708) With this as a basis, it is important to note what follows apropos of the procedure and the sentences of the Dutch tribunals:

1. The manner of proceeding, such as it is applied today in the tribunals of this ecclesiastical province to facilitate the sentence, can be described as follows: hearing of the parties and, if necessary, of one or two witnesses; judgment on the good faith of the spouses — this judgment having been deduced from a conversation which can be prolonged; opinion on the success or the failure of the marriage; opinion of the experts on the psychological attitude of the spouses towards the interpersonal relationship; affirmation of the impossibility on the part of the spouses to love one another anew or to resume married life; recognition of the cause of such a failure, whether responsibility may be involved or not; opinion of the judge on the concurrence of the spouses admitting and recognizing the failure of their marriage with, as a consequence, the nullity of their marriage; final sentence of the judge who declares the freedom of state, even without the knowledge of one of the spouses; or final sentence by three judges who establish that the marriage was celebrated invalidly or that there is no need to prolong it further.   * * 709 ** 709 **

2. The supreme authority has been asked at the present time to approve, after the fact, this expeditious mode of procedure which pretends to be more psychological and which has been employed several times. Such a petition of its very self already indicates the illegitimacy of the above-mentioned praxis.

3. This praxis, even if introduced under the heading of experimental in virtue of the dispensation accorded to the bishops, cannot be admitted since it is granted that there is question of laws which are constitutive and relative to the processes which safeguard the rights of persons and from which, in virtue of the decree, Christus Dominus, n. 3, b, and of the motu proprio, De Episcoporum muneribus, n. IV,1 not even the bishops can dispense.

4. The sentence rendered by the Rota on the Quebec case on 22 July, 1969, in the presence of Anne, cannot be invoked because there was question in the instance of a lack of discernment due to a serious psychic disturbance antecedent to the marriage.

6. When the sentences already pronounced are passed in review, it is, moreover, noted that the experts contradict themselves by affirming the absolute incapacity of the parties for marriage and afterwards declaring that these same persons are capable of contracting a new marriage.

Finally, on the subject of doctrine and procedure the following must be added:

1. The celebration of the marriage is not considered as the contract by which the marriage takes place but as a matrimonial debut which inaugurates the relationships between the spouses and becomes marriage progressively. Such an assertion subverts the foundations of marriage law.

2. Further, this erroneous doctrine never makes it possible to establish whether a marriage is valid or not. Incertitude which ** 710 ** 710 ** touches the existence of marriage necessarily admits of a social incertitude.

3. Contrary to the praxis of the Church and to proven jurisprudence, the Dutch judges apply the concept of moral impotence, which is of capital importance in the nullity of marriage, either to fear, or to homosexuality, or to other conditions of the subject.

4. The judges who, basing themselves on their decisions alone, declare the marriage null or dissolved even after numerous years of cohabitation and marital relations, seriously injure the rights of the persons.

5. A like manner of action on the part of the judges countenances free unions, is injurious to the dignity and to the stability of marriage, and weakens the very value of the conjugal act whereby the spouses are united to one another in a reciprocal giving. The doctrine of marriage without bond subverts the good and the order of society.

7. The pastoral concern to which certain Dutch judges often refer, must be called superficial. It is completely devoid of theological foundation and is more interested in remedying human situations in one way or another than in conserving revealed faith.

8. For the rest, the judges themselves should recognize that their mode of judging is received with difficulty in other regions and that in their own country it is challenged by certain members of the faithful who have been scandalized to see with what boldness human rights, even fundamental rights, have been injured.

May it please Your Eminence to consider all this well in conscience and to inform the other Dutch bishops of it in order that the ecclesiastical tribunals of this country may be regularized. In the case where some judge should refuse to conform, he must be removed from the exercise of his charge by the competent authority, as is natural, and the task of administering justice must be conferred without delay on proven men.

I take occasion, Your Eminence, to express my sentiments to you most sincerely in the Lord.

Mary Undoer of Knots - Inspired by Couple Saved from Divorce 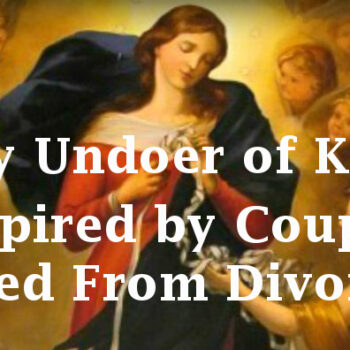