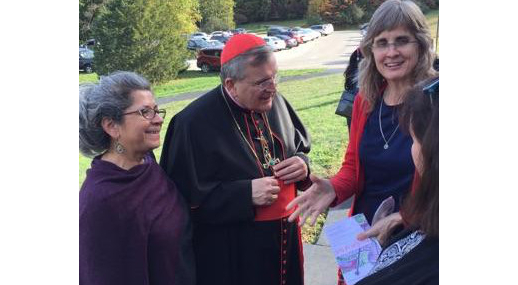 He affirmed us saying, “You should be.”

Mother of the Redeemer Retreat Center, Bloomington, IN.

With Cardinal Burke, are pictured Isabel McPhilips and Bai Macfarlane, from the Separated Faithful Group in Cleveland

By Bai Macfarlane – Along with two other faithful spouses, I attended a day of reflection by Cardinal Raymond Burke on “Holy Matrimony: Sacrament of Christ in His Church.” When we showed him our book “Separated Faithful,” and explained that we were faithful after being abandoned, he affirmed us saying, “You should be.”

I’ve shared a couple highlights on our YouTube Channel. DVD recordings of the October sessions were available to participants. The full recording will be publicized on web site run by the Franciscan Friars of the Immaculate in the United States HERE During his homily, Cardinal Burke talked about situations in which a man has been abandoned by his wife. The man’s “salvation consists in his fidelity to the existing marriage bond, and he can not pretend to establish another. His calling is to seek the salvation of the partner, even if he can do so only by praying for her.”
https://www.youtube.com/watch?v=iQIAjy1LTso#t=4m5s

In Cardinal Burke’s session on Marriage Preparation, he read text from the official Catholic Marriage Rite. When discussing section 7 of the Rite, he addressed the question of how much faith do parties need to enter marriage validly. He said that “the fullness of faith or perfection of faith is not required. If it were, then it would be impossible for many to enter a valid marriage, which is clearly contrary to the will of God.” If the parties cooperate with God’s grace, their faith will grow. To validly enter marriage, they need to do what the Church intends “which is not different in its essence from the natural sacrament.” (2:22)
https://www.youtube.com/watch?v=noCTU-gsvXw#t=2m22s

Cardinal Burke explained the meaning of “natural sacrament” in his talk about Catechesis on Marriage Even before Jesus raised marriage to a sacrament, God had already authored marriage.
https://www.youtube.com/watch?v=LoM2z5lX5v4#t=1m46s

Cardinal Burke reiterated the essential elements of marriage. “Holy Matrimony is the faithful, lifelong, and procreative union of one man and one woman. By its very nature, it excludes adultery, unnatural sexual expression, and sexual intercourse which is not open to life.”
https://www.youtube.com/watch?v=LoM2z5lX5v4#t=0m23s

In his talk on “Remaining in the Truth of Holy Matrimony,” Cardinal Burke gave a simple explanation of the result of the nullity process – wherein one party had accused his marriage of being invalid because of a specific reason. The Church does not “judge the validity of the marriage” he said. “If it gives a negative judgment, that is not a declaration that the marriage is valid, but simply a declaration that it hasn’t been shown that it is invalid” (1m38s)
https://www.youtube.com/watch?v=PjX0lakDjMI

When talking about the current nullity process, that has withstood the test of time, Cardinal Burke said that “with sadness” he has seen poorly prepared personnel.

“It is not the process that is in need of modifications, but the practice of some Bishops who do not provide well prepared and just workers for their tribunals. It has to be clear too that it isn’t a question of only having a degree in canon law (of being well prepared in that sense) but it has to be a person of right doctrine. In other words, a person can use-even canon law-in a dishonest way to produce unjust decisions. So, the bishop has to be careful that he first and foremost that the priests who are working on the tribunal are of sound doctrine, and that they have the knowledge of canon law in order to judge properly these cases.”
https://www.youtube.com/watch?v=-lTAoVV5Xz8#t=3m0s

Those affiliated with Mary’s Advocates support each other in remaining faithful to our marriage, and we also provide instruction on how to defend one’s marriage against accusations of nullity. 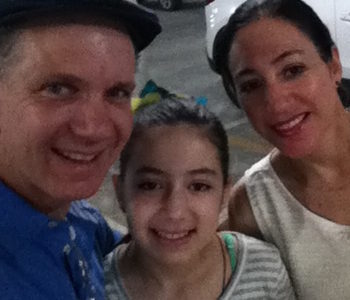