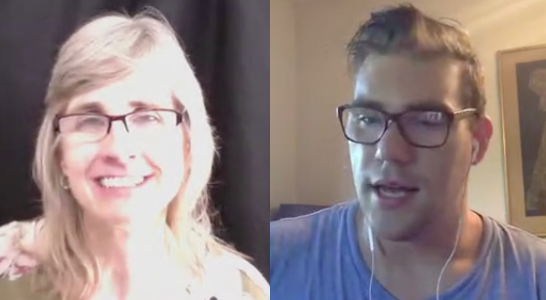 Adult child of divorce, Matthew Johnston, told me during our interview about the constitutional challenge his Mom is making against New York State’s no-fault divorce legislation.  The Schoharie County divorce court issued the divorce in January 2017, and his Mom submitted her written argument to the Third Department Appellate Court in Albany, New York on August 17, 2017.

Matthew says his Mom, after being abandoned by her husband (Matthew’s Dad), needed financial support. She filed for civil separation to get money and she hoped her husband would reconcile their marriage.  Instead, Dad filed for no-fault divorce against Mom. The judge gave Dad the no-fault divorce he wanted and passed to Mom the debts Dad incurred leading up to the divorce decree.   Matthew says the no-fault divorce system is unjust because there is no consideration for protecting the spouse who was not the abandoner.

In her case, Matthew’s Mom shows that no-fault divorce is unconstitutional because it violates the due process requirements of the U.S. constitution, and the legislature is obligated to prove how unilateral no-fault divorce serves the state’s public interest.

Rather than slowing unilateral no-fault divorce, the U.S. Federal Government has incentivized it, with “Child Support Enforcement and Family Support” (Title IV-D).  Billions of dollars are paid to state offices to employee workers who take money from a spouse who is court-ordered to pay child support.  The state employees’ livelihood is contingent on the courts issuing child support orders. I found, for example, that the state of Pennsylvania receives $132 million a year, which could cover salaries of $50,000 for 2,500 workers.  The states’ family service departments are in the ‘business” of collecting child support, and less business means less “pay” from the Federal Government.  States’ county family-offices employees need unilateral no-fault divorce, so courts can issue lots of child support orders.

Matthew rebuts the myth that adversarial divorce proceedings cause harm to children, estranging them from a parent.  He’s skeptical of the court’s supposed emphasis on doing what is best for children. “This idea that the emotional distress and hard feelings [toward one parent] comes from divorce proceedings is completely false. It has more to do with, actually, the wrongdoing than anything else.” Matthew says the tension in his relationship with his Dad would be alleviated if his Dad were to sincerely apologize, or at least be held accountable for his wrongdoing.

I told Matthew that the legislators added insult to injury be empowering judges to make things worse for children of divorce when they reward the parties who are abandoning and breaking their marriage promises.

Matthew describes how Marxist ideologies have proposed that monogamy is not natural, and some people (atheists or secularists) have adopted those beliefs and don’t think there is anything wrong with adultery.  However, other people with faith and religion value the institution of marriage, serving as the social order for stability and human relations.  The no-fault divorce legislation is merging are and muddying two things: “hippy style cohabitation” and “marriage.” When the states’ make no distinction, that is against the state’s public interest.