The Inseparability of Sacrament with Contract

In an e-mail interview with Bai Macfarlane on June 5, 2012, Fr. Sereno offered a straightforward breakdown of the quote from Pope Pius IX, from September 27, 1852, in the allocution “Acerbissimum.”

The Inseparability of the Sacrament of Matrimony with the Marriage Contract

The inseparability of the Sacrament of Matrimony with the Marriage contract between two baptized persons of different sex is a doctrinal statement held and defended by the Ordinary Church Magisterium and contained in c. 1055 2 CIC17 and c. 1012 §22 CIC83. In the collection “Leges Ecclesiae” by Ochoa there exist no decision of the Holy Office in April 1952 regarding this issue and the American Bishops. That, however, does not mean either that such a decision does not exist or that the Ordinary Magisterium does not hold the inseparability of the Sacrament of Matrimony and the marriage contract. In his Apostolic Letter “Ad Apostolicae” of August 22, 1851, Pius IX enumerates the following statements as an erroneous and needing to be rejected about the Sacrament and contract of marriage (note 1) :

That under no possible rationale can it be proposed that Christ raised Matrimony to the dignity of a Sacrament; that the Sacrament of Matrimony is all but accessory to the contract [of marriage], and for this reason separable, and that the very Sacrament [of Matrimony] is found only in the unique nuptial blessing: that according to natural law the bond of marriage is not indissoluble, etc.

On Setember 27, 1852, Pius IX in the allocution “Acerbissimum”, n. 3, writes to the Bishops of the ecclesiastical region of New Granada (Colombia, Ecuador, Venezuela, Panama), the following regarding the civil legislation of that region enacted the previous year, which legislation was contrary to Church law (note 2) :

We [still] are saying nothing about that other decree [civil], by which, having despised all together the mystery, dignity and the sanctity of the Sacrament of Matrimony, and having ignored and overturned totally its [Sacrament of Matrimony] institution and furthermore having reviled wholly the power of the Church in selfsame Sacrament [of Matrimony] was being proposed according to heretical errors, that already have been condemned, and even contrary to the doctrine of the Catholic Church, that Matrimony be considered as a civil contract alone, and that in various cases divorce, properly as such [the dissolution of the bond], be allowed, anfd that all matrimonial causes be deferred to lay [civil] tribunals and that by them [civil tribunals] be judged; because nobody who is Catholic ignores or can ignore that Matrimony is truly and properly one of the seven Sacraments of the Gospel law that was instituted by Christ the Lord, and by the same token that among the faithful marriage cannot be established without at one and the same time it be a Sacrament, and furthermore for that purpose it is that whatever other union between a Christian man and woman – except that it be the Sacrament – even having been established in force of any civil law, is nothing else than a torpid and destructive concubinage, which [concubinage], having been condemned so greatly by the Church, and also consequently the Sacrament [of Matrimony] cannot be separated ever from the conjugal alliance [contract], and that it pertains entirely to the power of the Church to discern all these same things, which things can belong in any way to the selfsame Matrimony.

There are other documents that are pertinent, among which Leo XIII’s Encyclical “Arcanum” of February 10 1880 is probably the most important. The entire Encyclical is dedicated to the Sacrament of Matrimony. Even as “Arcanum” states the inseparability (n. 12) and points out the evils of civil divorce (nn. 16-19), it strikes a note of cooperation with the civil authorities for the protection of marriage (nn. 25-26). The statement concludes with the formula “quin sit eo ipso sacramentum”, which is the formula used in the 1917 codification and its revision in 1983. Here is the statement about the inseparability (note 3) .

Nor let that so much aforementioned distinction from the Regalists influence anyone, in virtue of which distinction they separate the nuptial contract from the Sacrament [of Matrimony] – by the same sound token the reasons of the Sacrament of the Church having been preserved – such that they turn over the contract into the power and control of the civil authorities. – for indeed this kind of distinction or more truly a separation cannot be proven; because in Christian Matrimony the contract is not separable from the Sacrament is established; and especially on that account a true and legitimate [marriage] contract cannot exist without by the selfsame [contract] be a Sacrament.

More Church document supporting not only this teaching of the Ordinary Magisterium of the Church but also this universal discipline of the Church are found in the annotated edition of the Code of Canon Law, promulgated in 1917, for canon 1055 §22 (CIC17) by Cardinal Gasparri. 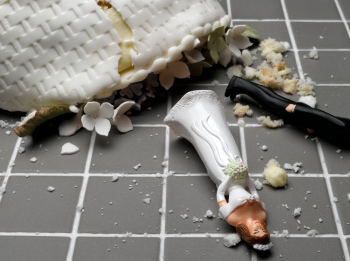