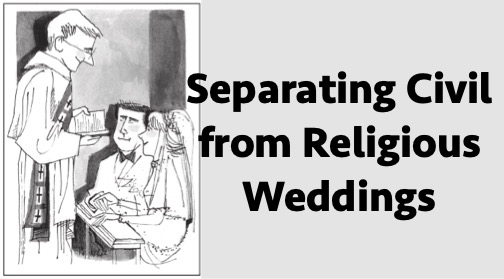 Here is a question for priests: Why should Catholic priests participate in civil marriage ceremonies?

I suppose all Catholics would agree that it would be totally inappropriate for a Catholic priest presiding over a wedding to conclude the ceremony by saying: “You have just entered into one of the most important of all human relationships — but I would caution you not to think of it as being necessarily a permanent relationship. It is only as permanent as you would like to make it. If either of you would like to end your marriage tomorrow, you have a perfect right to do so. If you would like to remain married until death, you can do that too. It’s all up to you. Don’t feel constrained by the vows you have just taken. The vows are expressed in traditional language, and this respect for tradition is a lovely thing; but the vows don’t really mean anything.”

Yet this is exactly what priests do say, at least by implication. In the United States, despite its famous separation of church and state, priests perform two wedding ceremonies at the same time, a religious ceremony and a civil ceremony. The laws of the Church give the priest the power to perform a sacramental marriage, while the laws of our states give Catholic priests (as well as clergy persons from other denominations) the power to perform a civil marriage. Sacramental marriage is binding for life; but civil marriage, given our no-fault divorce laws, hardly binds at all. By the laws of our states, either spouse is free to walk out of a marriage at any time, and the departing spouse does not have to have a reason for departing weightier than “I don’t like being married to this other person any more” — a reason that courts will recognize as sufficient to dissolve a marriage.

The question I want to ask is this: Why should Catholic priests participate in such civil ceremonies? I ask this as a purely rhetorical question, for I think the answer to it is very plain: They should not. Catholic priests should perform sacramental marriages only. If the newly married Catholic couple would also like to be married according to civil law as well, that’s up to them. The priest should not compromise his office by assisting them.

Once upon a time civil marriage in America strongly resembled Catholic marriage in that civil marriage was virtually indissoluble. Later, by the late 19th and early 20th centuries, divorce became more common in the United States, but still it was rare and not easy to obtain: not easy legally and not easy socially, for public opinion was still strongly opposed to it. By the middle decades of the 20th century, due at least in part to the example given by many Hollywood stars, divorce-and-remarriage had become a far more common thing in America; but still there were legal barriers to it, and a public opinion stigma was attached to it.

In the 1970s, however, the United States experienced a “divorce revolution” (as some have named it). Throughout the decade divorce rates skyrocketed, reaching a peak in 1979, after which they leveled off at a high plateau for a couple of decades. (The rate has dropped somewhat in recent years, but it remains high.) There was a twofold reason for unprecedented high divorce rates, these two reasons largely overlapping one another. One was the sexual revolution of the ’60s and ’70s: this revolution eroded or destroyed almost every restriction on sexual behavior, and since marriage involves sexual restrictions it is small wonder that marriage became easy to dissolve; a sexually permissive public opinion no longer strongly supported the notion that marriage is a permanent thing. The other reason was the no-fault divorce laws that were enacted in the late ’60s and early ’70s. These laws permitted divorce even though neither party had committed what had previously counted as a legal “fault” (adultery, desertion, habitual drunkenness, physical or mental cruelty, etc.). Now it was possible for the partners to get divorced because they asserted that their marriage had “irretrievably” broken down. Indeed it was possible to get divorced even though only one partner made this assertion; for the fact that he or she would make such an assertion was itself strong evidence that the marriage had broken down. And so by the middle 1970s virtually all legal barriers to divorce had disappeared, and most social barriers had disappeared as well: no longer did a social stigma attach to a man or woman who divorced and remarried.

If there had been a time in American history when the idea of a civil marriage bore a strong resemblance to the Catholic idea of a sacramental marriage, that time had completely gone by the 1970s. So isn’t it preposterous that Catholic priests have continued to perform civil marriages during the last 35 years?

But wait! It gets even worse. The chasm separating the Catholic idea of marriage from the civil idea grows even wider as we move further and further into the era of same-sex marriage. As I write this (in June of 2006) only one state, Massachusetts — a state, incidentally, that has one of the highest percentages of Catholics in its population — has authorized same-sex marriage. But barring an amendment to the U.S. Constitution banning same-sex marriage, it seems inevitable that many more states will eventually authorize the marriage of gay couples and lesbian couples. Perhaps some of them will have crossed that line by the time this essay appears in print.

Given same-sex marriage, the hypothetical quotation given in the first paragraph of this essay will have to be expanded. The priest, insofar as he is the performer of a civil marriage, will in effect be adding this to his implicit comments: “You have just entered into a union which is between a man and a woman, or between a man and a man, or between a woman and a woman. The civil institution of marriage that you have just elected to become participants in has neither permanence nor gender specificity. It bears absolutely no resemblance to the traditional Catholic institution of marriage.”

There are good reasons, I recognize, that a couple married in a Catholic ceremony would also wish to have the benefits of a civil marriage, debased though that institution has now become; these good reasons have to do with property rights and with rights of child custody and support. But this is easily taken care of. Following the sacramental wedding in a Catholic church, the couple can make a small detour on their way to the wedding reception. They can stop at city hall or the courthouse and go through a second ceremony, a civil “marriage.”

But for the Church, through its priests, to participate in the performing of civil weddings gives the message that the Church does not really have any strong objections to the modern idea of a civil marriage. Conversely, if the Catholic Church in America were to say, “We will no longer take part in these sham marriages,” quite the opposite message will have been delivered. The Church will be saying, both to its own members and to the world at large,”We truly believe in the traditional Catholic idea of marriage.”

There was a time — in the 19th century and the first two-thirds of the 20th century — when it made sense for American Catholics to try to minimize the differences that set them apart from the dominant American culture, in those days a Protestant culture. There was an old Anglo-Protestant prejudice against Catholics and their religion, a prejudice born in England in the 16th century and carried to America in the 17th. The charge against Catholics was twofold: for one, they could not be true patriots because their first loyalty was to a “foreign prince” (the pope); and further, they were incapable of being good citizens of a free society because the hierarchical and authoritarian nature of their religion rendered them morally and psychologically unfit for freedom. Given such a prejudice and the need to overcome it, it was eminently reasonable for Catholic immigrants and their descendants to demonstrate that their beliefs and values were very similar to the beliefs and values held by Protestant Americans.

But we are now living in a new era, new in a number of very important respect: (1) Catholics have long since demonstrated that they are good democratic Americans; there is no need to keep bending over backwards to prove this point. (2) The old Protestant domination of American culture is fast fading, being replaced by a new secularist (that is to say, virtually atheistic) dominance. (3) The old Anglo-Protestant prejudice against Catholicism, having grown weaker and weaker over the last two centuries, has virtually vanished; it has been replaced by an extremely virulent secularist prejudice, a prejudice directed not just against Catholicism but against all forms of Christianity. In this new era, it is irrational for Catholics to minimize their differences from the prevailing culture. Rather, they must stress the differences, and one striking way of making that stress would be for Catholic priests to abandon their practice of performing civil marriages — civil marriages which conform to the secularist idea, not the Christian idea, of marriage.

David R. Carlin
Dr. David R. Carlin is a professor of philosophy and sociology at the Community College of Rhode Island (Warwick). He was a member of the Rhode Island Senate for 12 years and Senate Majority leader for two of those years (1989-1990). He is the author of many articles, some of which have appeared in Commonweal, America, First Things, and Our Sunday Visitor. His most recent book is Can a Catholic Be a Democrat? (Sophia Institute Press, 2006). His last article in HPR appeared in May 2006. He can be reached at carlin@hotmail.com 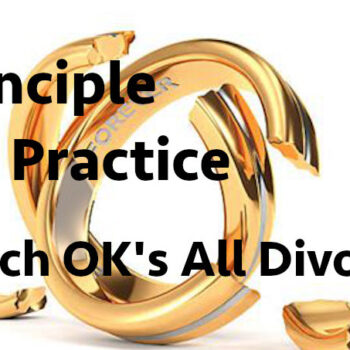