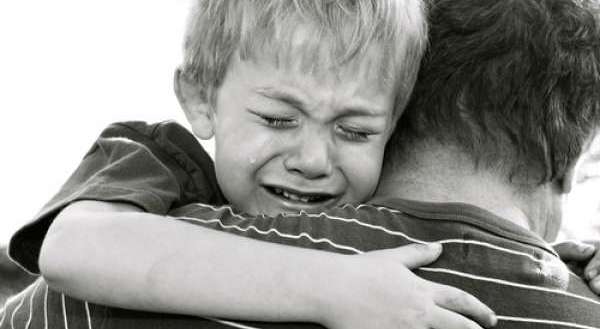 A Maryland husband is challenging the constitutionality of unilateral no-fault divorce with the assistance of religious liberties expert lawyer, Whitman Brisky. The non-profit organization, Mary’s Advocates, conducted interviews with Brisky and the Husband, whose identity is being kept confidential.

The Husband was shocked to learn that a civil court judge is likely to aid and abet his wife’s marital abandonment. In Maryland, after 12 months of separation, courts issue no-fault divorces against the wishes of the other spouse and children. Since the time his wife filed for divorce, the Husband says he’s paid over $200,000 in lawyer fees answering all the court paperwork his wife’s lawyer filed and defending himself against false allegations of cruelty. The Husband is a well-respected medical doctor and he says, “My wife’s lawyer knew they needed no proof against me, because they’ll win their no-fault divorce after 12 months.” As a strong Christian, the Husband will not agree to destroy his own family by divorce, and he prays his wife chooses to reconcile:

“Her lawyer tells her that she has the right to a no-fault divorce, but I believe with proper help, we could be happier than ever. Children need their Mom and Dad together in one home; the lawyers are getting rich destroying the cell upon which society is built.”

After his wife was separated for a year, she updated her complaint to include the no-fault ground. The Husband’s argues that no-fault divorce is unconstitutional for those who enter religious marriages in which there is no option of no-fault divorce in the parties’ marriage agreement. 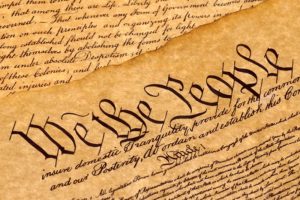 Consulting lawyer, Whitman Brisky, with the Chicago law firm of Mauck & Baker, says “We are raising arguments primarily under what might be best understood as contract law – that is, the parties entered into the marriage with certain understandings about the grounds under which it could be dissolved.” More court cases are being decided on appeals because of the gay marriage issue. “There are recent cases declaring Marriage to be a fundamental right. If marriage is a fundamental right, then dissolution of that right is also fundamental requiring a compelling state interest and a narrowly tailored statute,” says Brisky.

Like millions of couples, the Husband proposed to his bride, years ago, because they were in love and wanted to raise a family together. On the minimal practical level, the Husband wanted to start having children with the woman who agreed to jointly support a common household; he was going to live with the children they conceived. Their children range in age from three to eight-years-old, and his wife had been able to be a stay-at-home mom with a comfortable standard of living.

They married in the Orthodox Christian tradition, where the Husband knows that if he committed adultery or was a crazed abuser, he would forfeit his right to live with his wife and children; furthermore, he’d be expected to continue to support them. The Husband says, “According to the marriage agreement that my wife and I entered, if my wife abandons the marriage, I forfeit no rights.”

In the Husband’s filing with the Court, he points out that the parties were married “in accordance with the rules and customs of the Orthodox Church.” In Maryland, for parties entering religious marriage contracts, the law authorizes ministers “to join together in matrimony according to the rules and ceremonies of your church” (§2-403 (a)(1)). The Husband told the Court that under “the canons of Orthodox Church law, both of which are applicable to the marriage, divorce will not be granted or recognized without proof of fault by a party to the marriage.” Furthermore, he said, “Defendant has committed no act which would entitle Plaintiff to a divorce under “the canons of the Orthodox Church, and has not consented to the divorce requested by Plaintiff.”

In his written answer to his wife’s complaint for no-fault divorce, he defended traditional religious marriage, claiming that no-fault divorce is unconstitutional for his marriage (Direct Quotes):

To the extent that Maryland law, as applied to Defendant, deprives Defendant of his right to remain married in a manner contrary to the agreement of the parties … and the canons of the Orthodox Church, and absent a compelling state interest, such law violates the Fourteenth Amendment to the Constitution and deprives Defendant of a fundamental right.

The United States Supreme Court has recognized the importance of children having parents married to each other for the wellbeing of those children, [Obergefell] … and that it is also a fundamental right that parents of children have a right to be married. Numerous studies have shown that children do best when they are living with their parents who are married to each other. To the extent that Maryland law violates this fundamental right of parents and children as applied to Defendant and his children, it violates the Fourteenth Amendment to the Constitution.

The parties, having been married … in accordance with the rules and customs of the Orthodox Church, and agreeing that their marriage would be bound by … the canons of the Orthodox Church, this Court may not dissolve the marriage contrary to such law, canons and the agreement of the parties. Such dissolution would deprive Defendant of his rights to due process and the free exercise of religion pursuant to the First and Fourteenth Amendments to the Constitution and amount to an impairment of the obligations of the marriage contract in violation of Article I, Section 10, Clause 1 of the Constitution.

A trial is scheduled in May, at which time the Husband hopes to be reconciled with his wife. But if not, he’s planning to make the case that it is unconstitutional to force a no-fault divorce on an honorable Defendant whose spouse agreed to a Christian marriage contract wherein there was no exit-option of no-fault divorce. The state of Maryland, he argues, has no constitutionally allowed right to deprive him of his children, property, or marriage.

Cleveland's Fr. Gary Yanus is Too Friendly with Divorce Lawyers 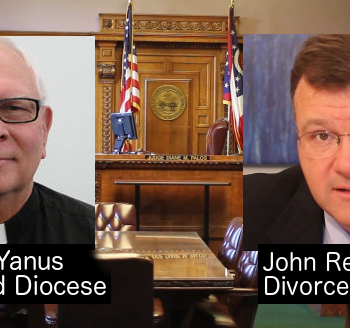 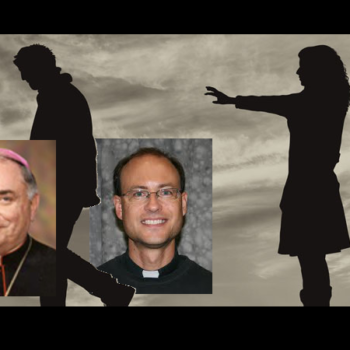