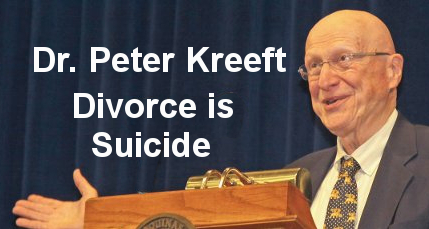 Almost nobody defends nuclear war, or insider trading, or oil spills, or even smoking. But if it has anything to do with sex, it’s justified, sanctified, and glorified, even if it’s murder. Here are two examples of murder justified in the name of sex.

Divorce is a form of suicide because it’s the suicide of the one flesh that was created by marriage. The basic unit of all society is the family.

Suppose there was a society in which half the citizens committed suicide. What a desperately sick society. Well that’s us. The only institution in the world that says no to divorce is the Catholic Church.

But it’s all about sex.

Imagine there was some other practice (not connected to sex) as divorce is, that had these three very clearly and strongly documented effects:

Would any society tolerate such a thing? Of course not, unless it was part of the sexual revolution.

Find the full presentation, “Winning the Culture War,” by Dr. Peter Kreeft on Formed.org. His talk was given at the 2012 Lighthouse Catholic Media Conference. Excerpt from min 30., sec. 19.