English Translation
Waterworth, James.
The Canons and Decrees of the Sacred and Œcumenical Council of Trent
London : Burns and Oates, 1888

Mary’s Advocates introduction: In the 1500’s Catholic Bishops met to set straight the Church’s divine law and establish some positive man-made laws. The canons promulgated in the Council of Trent are not merely man-made positive laws. Of significance is that they show how cases of separation of spouses belong to the competence of the church, and that anyone who says otherwise “let him be anathema.”   According to the Dictionary of Canon Law, by Rev. Trudel in 1919, “Anathema or excommunication is a censure by which one is excluded from the communion of the faithful and subjected to disabilities defined in Canon Law.”  Furthermore, those who disagree with the canons below are heretics.

Matrimonial causes included cases of separation of spouses and cases challenging the validity of a marriage.  In both kinds of cases, the authority with competence is to determine the obligations that have arisen for the parties of the case.

Being the eighth under the Sovereign Pontiff, Pius IV., celebrated on the eleventh day of November, MDLXIII.

DOCTRINE ON THE SACRAMENT OF MATRIMONY

The first parent of the human race, under the influence of the divine Spirit, pronounced the bond of matrimony perpetual and indissoluble, when he said; This now is bone of my bones, and flesh of my flesh. Wherefore a man shall leave father and mother, and shall cleave to his wife, and they shall be two in one flesh. But, that by this bond two only are united and joined together, our Lord taught more plainly, when rehearsing those last words as having been uttered by God, He said, therefore now they are not two, but one flesh; and straightway confirmed the firmness of that tie, proclaimed so long before by Adam, by these words; What therefore God hath joined together, let no man put asunder. But, the grace which might perfect that natural love, and confirm that indissoluble union, and sanctify the married, Christ Himself, the institutor and perfecter of the venerable sacraments, merited for us by His passion; as the Apostle Paul intimates, saying: Husbands love your wives, as Christ also loved the Church, and delivered himself up for it; adding shortly after, This is a great sacrament, but I speak in Christ and in the Church. Whereas therefore matrimony, in the evangelical law, excels in grace, through Christ, the ancient marriages; with reason have our holy Fathers, the Councils, and the tradition of the universal Church, always taught, that it is to be numbered amongst the sacraments of the new law; against which, impious men of this age raging, have not only had false notions touching this venerable sacrament, but, introducing according to their wont, [Page 194] under the pretext of the Gospel, a carnal liberty, they have by word and writing asserted, not without great injury to the faithful of Christ, many things alien from the sentiment of the Catholic Church, and from the usage approved of since the times of the apostles; the holy and universal Synod wishing to meet the rashness of these men, has thought it proper, lest their pernicious contagion may draw more after it, that the more remarkable heresies and errors of the above-named schismatics be exterminated, by decreeing against the said heretics and their errors the following anathemas.

ON THE SACRAMENT OF MATRIMONY.

CANON I.-If any one saith, that matrimony is not truly and properly one of the seven sacraments of the evangelic law, (a sacrament) instituted by Christ the Lord; but that it has been invented by men in the Church; and that it does not confer grace; let him be anathema.

CANON II.-If any one saith, that it is lawful for Christians to have several wives at the same time, and that this is not prohibited by any divine law; let him be anathema.

CANON III.-If any one saith, that those degrees only of consanguinity and affinity, which are set down in Leviticus, can hinder matrimony from being contracted, and dissolve it when contracted; and that the Church cannot dispense in some of those degrees, or establish that others may hinder and dissolve it ; let him be anathema.

CANON IV.-If any one saith, that the Church could not establish impediments dissolving marriage; or that she has erred in establishing them; let him be anathema.

CANON V.-If any one saith, that on account of heresy, or irksome cohabitation, or the affected absence of one of the parties, the bond of matrimony may be dissolved; let him be anathema.
[Page 195]

CANON VI.-If any one saith, that matrimony contracted, but not consummated, is not dissolved by the solemn profession of religion by one of the married parties; let him be anathema.

CANON VII.-If any one saith, that the Church has erred, in that she hath taught, and doth teach, in accordance with the evangelical and apostolical doctrine, that the bond of matrimony cannot be dissolved on account of the adultery of one of the married parties; and that both, or even the innocent one who gave not occasion to the adultery, cannot contract another marriage, during the life-time of the other; and, that he is guilty of adultery, who, having put away the adulteress, shall take another wife, as also she, who, having put away the adulterer, shall take another husband; let him be anathema.

CANON VIII.-If any one saith, that the Church errs, in that she declares that, for many causes, a separation may take place between husband and wife, in regard of bed, or in regard of cohabitation, for a determinate or for an indeterminate period; let him be anathema.

CANON IX.-If any one saith, that clerics constituted in sacred orders, or Regulars, who have solemnly professed chastity, are able to contract marriage, and that being contracted it is valid, notwithstanding the ecclesiastical law, or vow; and that the contrary is no thing else than to condemn marriage; and, that all who do not feel that they have the gift of chastity, even though they have made a vow thereof, may contract marriage; let him be anathema: seeing that God refuses not that gift to those who ask for it rightly, neither does He suffer us to be tempted above that which we are able.

CANON X.-If any one saith, that the marriage state is to be placed above the state of virginity, or of celibacy, and that it is not better and more blessed to remain in virginity, or in celibacy, than to be united in matrimony; let him be anathema.

CANON XI.-If any one saith, that the prohibition of the solemnization of marriages at certain times of the year, is a tyrannical superstition, derived from the superstition of the [Page 196] heathen; or, condemn the benedictions and other ceremonies which the Church makes use of therein; let him be anathema.

CANON XII.-If any one saith, that matrimonial causes do not belong to ecclesiastical judges; let him be anathema. 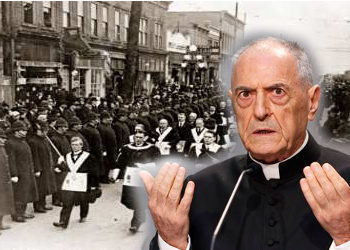