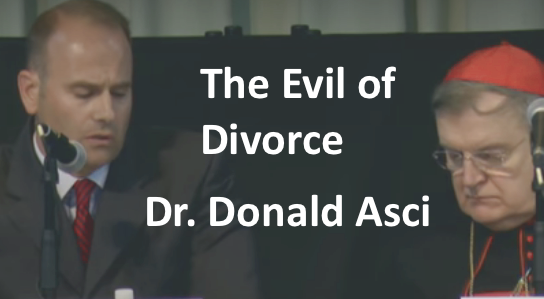 Asci, Donald.
“The Evil of Divorce and the Dignity of the Human Person – Understanding the Immorality of Divorce through St. John Paul II’s Theology of the Body.”
Mary’s Advocates
6 Nov. 2017.
“marysadvocates.org/wp-content/uploads/2017/11/the_evil_of_divorce_donald_asci.pdf“

On Sept. 8, 2015, at Franciscan University of Steubenville, Cardinal Raymond Burke gave a keynote address followed by a panel discussion, including the presentation by Dr. Donald Asci, STD.  The program was titled “The Synod on the Family: Addressing the Instrumentum Laboris.” As the bishops were preparing for their second synod, their working document, Instrumentum Laboris, had received much scrutiny.

Dr. Asci says, “We need to make recognizing the indissolubility of marriage and the evil of divorce a prominent feature of our Catholic faith and identity, something along the line of the ways in which we are pro-life and in the ways in which we speak out against the recognition of same sex unions precisely because the gospel requires us to defend the dignity of the human person and to foster hope among ourselves and the world around us.”

In The Joy of Love Pope Francis recalled a key component of Catholic doctrine and reiterated a major concern of the synod fathers by stating, “Divorce is an evil and the increasing number of divorces is very troubling.” This essay reexamines the evil of divorce in light of the work of Pope Francis and the synod fathers by taking up their call to utilize St. Pope John Paul II’s “theology of the body” to address the crisis regarding marriage in the modern world, a crisis in which divorce has emerged as a major and “very troubling” threat to the wellbeing of men and women and their families. The essay considers the evil of divorce in terms of traditional Catholic doctrine and from the perspective of the theology of the body, which provides a clearer sense of how the evil of divorce entails an affront to the intrinsic value of the person and a type of consumerism in the marital sphere. The essay also examines how divorce can in some ways be a form of despair, especially despair in the face of suffering or despair over the possibility of reconciliation, which sets divorce against the sacramental character of marriage. Additionally, this essay proposes that since divorce not only violates the dignity of the human person but also entails an element of despair over the power of God’s grace, confronting the evil of divorce should be a fundamental and explicit component of the Church’s evangelization and pastoral work. Consequently, the essay also proposes that by failing to address the evils of divorce clearly and adamantly the Church will be hindered in its attempts to defend the dignity of the human person in other situations (e.g. euthanasia, abortion, and the sex industry) and in its attempts to foster Christian hope in general and in the sexual sphere specifically.

… the basic Catholic doctrine on the immorality of divorce seems to have faded from the consciousness of Catholics and from the pastoral work of the Church in recent years. In my work over the past two decades I have certainly encountered a prevalent ignorance among Catholics regarding the immorality of divorce, with many sincere people even expressing the belief that divorce is not immoral but only becomes immoral when coupled with a civil marriage to a second person (p. 5).

… With this notion of divorce in place, key distinctions can be drawn between divorce and civil divorce, separation, and annulment in Catholic doctrine (p. 7).

… Attempts to justify divorce invariably center on so-called insurmountable difficulties that lead to irrecon­cilable difference among the spouses, and divorce is presented as the logical solution to this supposedly irreparable situation. However, the rationale of this approach to divorce depends upon the notion that marital difficulties can be insurmountable, and this runs directly contrary to Catholic doctrine on the grace of the sacrament of marriage (p. 16).

… The Church would appear hypocriti­cal if it turned a blind eye to the consumption and discarding of a spouse through divorce but then tried to speak out against the consumerism of sex trafficking and pornography (p. 19). 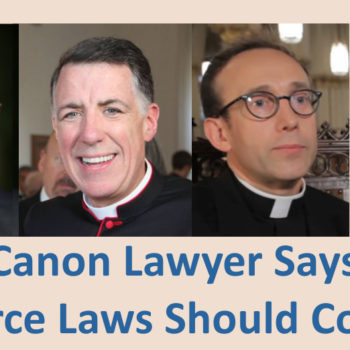