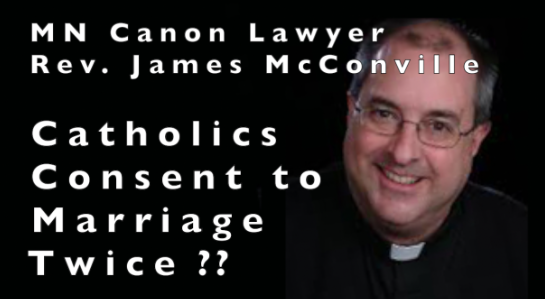 With the non-profit organization Mary’s Advocates, I work to reduce unilateral no-fault divorce and support those who are unjustly abandoned.  From Catholics who properly consented to the essential obligations of marriage, I’ve heard about statements made by our clergy that unfortunately ratify the immoral practices of no-fault divorce proceedings. Please reconsider how you talk about civil courts.

I found your statements in an interview tribunal personnel had with host Patrick Conley on The Rediscover Hour, a production of the Archdiocese of Saint Paul and Minneapolis in cooperation with Relevant Radio.  In discussing the civil forum, you said this:

There is something in the civil law called an annulment, but that is a different animal than what we are doing. That is looking at the actual CIVIL exchange of consent.  It has some different grounds; some of them overlap with what we do, but it is a different thing.

You indicate that tribunals require a petitioner to get a civil divorce before the tribunal will accept a case challenging the validity of the marriage.  The existence of a civil divorce allows you “in good conscience go ahead and look at these kinds of cases without feeling like we are actually breaking up a marriage.” (minute 39:30)

From the perspective of an abandoned spouse, Catholic canon lawyers’ silence prior to and during divorce proceedings feels like the canon lawyers are tacitly condoning marriage breakup. Canon law requires intervention before divorce. Marriages do not breakup by themselves; one or both spouses renege on their marriage promises. If the cause of reneging was invalidity, then the grounds of invalidity are relevant to the obligations of the reneger to the other spouse and children. Unilateral no-fault divorce recognizes none of this.

When Catholics exchange marriage promises in a Catholic ceremony, there is no civil exchange of consent. There is one consent: the consent in the “Order of Celebrating Marriage.” In typical US tribunal marriage nullity cases, it seems you only make judgements about relieving a party from one obligation of marriage: the obligation to be married to only one person until either party dies.  However, there are other obligations of marriage that are invaluable for everyone who says Catholic marriage promises. When you act like there are two marriage consents (both civil and Catholic), the faithful get the impression that the Church doesn’t care about the other obligations and corollary rights of marriage. Those other rights are trampled by no-fault divorce practices in virtually every case.

No-Fault Divorce is an Abomination against Catholic Marriage Ceremony

For example, a normal Catholic married father has the right to take care of the physical, social, cultural, moral, and religious education of his children (See canon 226 §2 & 1136). This happens in natural everyday interactions with Dad. Divorce orders deprive children of their natural everyday access to Dad even though he did nothing to justify separation of spouses and flawlessly consented to marriage. Parties are obligated to maintain a common marital home except under limited circumstances, but no-fault divorce courts purport to relieve all petitioners of this obligation (canon 104 and 1151).

A Catholic spouse who earns much less money than the other has the right to benefit from the full contribution of the higher-wage-earner to the maintenance of the martial home (See can. 1055 “good of the spouses” and 1917 CIC can. 1013 mutuum auditorium).  When the lower-wage-earner did nothing to justify separation of spouses, no-fault divorce orders relieve the higher-wage-earner of most all of the obligations to support the party that wants to keep the family together. Worse yet, the courts often order the party who did not cause the breakup to give half or more of the property to the spouse who caused the breakup. The party who wants to keep the family together, who did not cause the breakup, is only allowed to visit his children on a restrictive schedule and is often ordered to pay support to the other party who lives with the children.

Because of no-fault divorce, the civil forum makes no distinction between the spouse that reneged on the marriage promises and the spouse who is counting on those promises to be upheld. See Minnesota Stat. § 518.13(2) on irretrievable breakdown. When one party reneges on his or her marriage promises for six months by separation and says “I feel marital discord that adversely affects my attitude toward marriage,” the Minnesota judge will force a no-fault divorce on the other spouse and children.

Plea: Change what You Say about Civil Forum

Please look at the Minnesota statues about marriage. Catholic marriages are not solemnized by the state. They are solemnized by “a licensed ordained minister” of our denomination (Minn. Stat. § 517.04). Look at the Freedom of Conscience section of the state constitution, “Nor shall any control of or interference with the rights of conscience be permitted” (Art. 1, Sec. 16). Our Catholic doctrine and canon law never relegated to the civil forum the competence to decide the obligations of parties who said marriage promises in a Catholic ceremony.  The state only has competence to decide about the merely civil effects of marriage (such as tax-filing status), but certainly not the rightful competence to relieve a party of the obligation to maintain the common conjugal life, to support one’s spouse and children in the marital home, nor forcibly separate children from everyday access to a parent who’s done nothing to justify separation of spouses who flawlessly consented to marriage.

The next time you have a chance to teach about marriage, will you change how you talk about consent? Parties consent to marriage once. The state license is a registry of the consent. Parties to a Catholic marriage promise to uphold the obligations and rights of marriage described by the Catholic doctrine and canon law. If someone reneges on the marriage promises, the Catholic doctrine, principles, canon law, and natural law, should rule the determination of the obligations of parties toward each other. Civil judges who enforce no-fault divorce statutes have no competence to interfere with marriage promises said in a Catholic marriage ceremony.

If a party was really mentally incompetent at the time of marriage consent, then his one marriage consent is invalid in both the civil and Church forum. Would you please require him to petition for a civil annulment “because of mental incapacity” per Minnesota Stat. § 518.02(a). Prior to his petitioning for a civil annulment, would you instruct parties of their “moral and even civil obligations binding them toward one another and toward their children” as required in church nullity decisions (Mitis Iudex canon. 1691 §1).  One who was mentally incompetent at the time of marriage would have an invalid marriage per Catholic canon 1095.

If a party simulated his marriage consent, then his one marriage consent is invalid in both the civil and the Church forum. Would you please require him to petition for a civil annulment citing Minnesota Stat. § 518.02(a) because “consent of either was obtained by force or fraud.” One committing fraud regarding essential elements or properties of marriage would make his marriage invalid in the church forum due to canon 1101, simulation. If marriage was invalid due to force, it would be invalid per Catholic canon 1103.

In addition to your requirement to instruct parties of their moral and civil obligations in a Church annulment decision, canon 1611 requires the tribunal judge to instruct the parties in any contentious case of their obligation toward each other as a result of the ecclesiastic trial.  For those who have no basis for invalidity of their marriage, will you instruct them of their obligations in the ecclesiastic judicial case of separation of spouses (or bishop’s decree per canon 49). For those who have an invalid marriage, but not for a basis that overlaps with civil grounds for nullity, will you instruct them of their obligations prior to allowing them to obtain a civil divorce, so that innocent parties are protected from no-fault rulings.

Long before the 1983 Code of Canon law promulgated clearly the universal requirement of a Church judgement prior to one filing a marriage case in the civil forum, we already had the same requirement in our particular law in effect in the United States (US Bishops’ Conference Third Plenary Council of Baltimore, art. 124 and 126). See the teaching at a conference of the Canon Law Society of America from Rev. James P. Kelly, JCD, a judge of the Archdiocese of New York, about requirements prior to a party petitioning in the civil forum for divorce, annulment, or separation, “Separation and Civil Divorce” May a Catholic Seek a Civil Divorce, pg. 219.

Mary’s Advocates’ goal is to strengthen marriage. If clergy would stop acting as if the civil courts have more competence than they actually have, I bet a number of divorce plaintiffs would choose to work on reconciling their marriage rather than force a no-fault divorce.  Those who renege on their marriage promises should be held accountable to repair the damage as much as possible, rather than be rewarded in no-fault divorce proceedings. 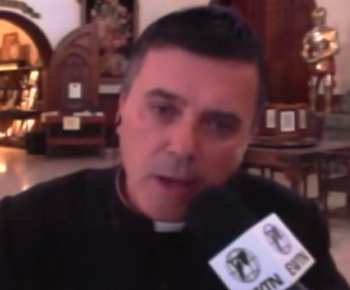 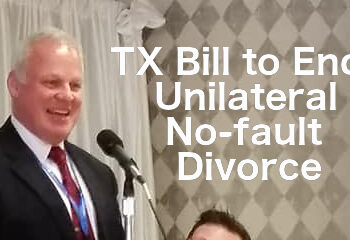